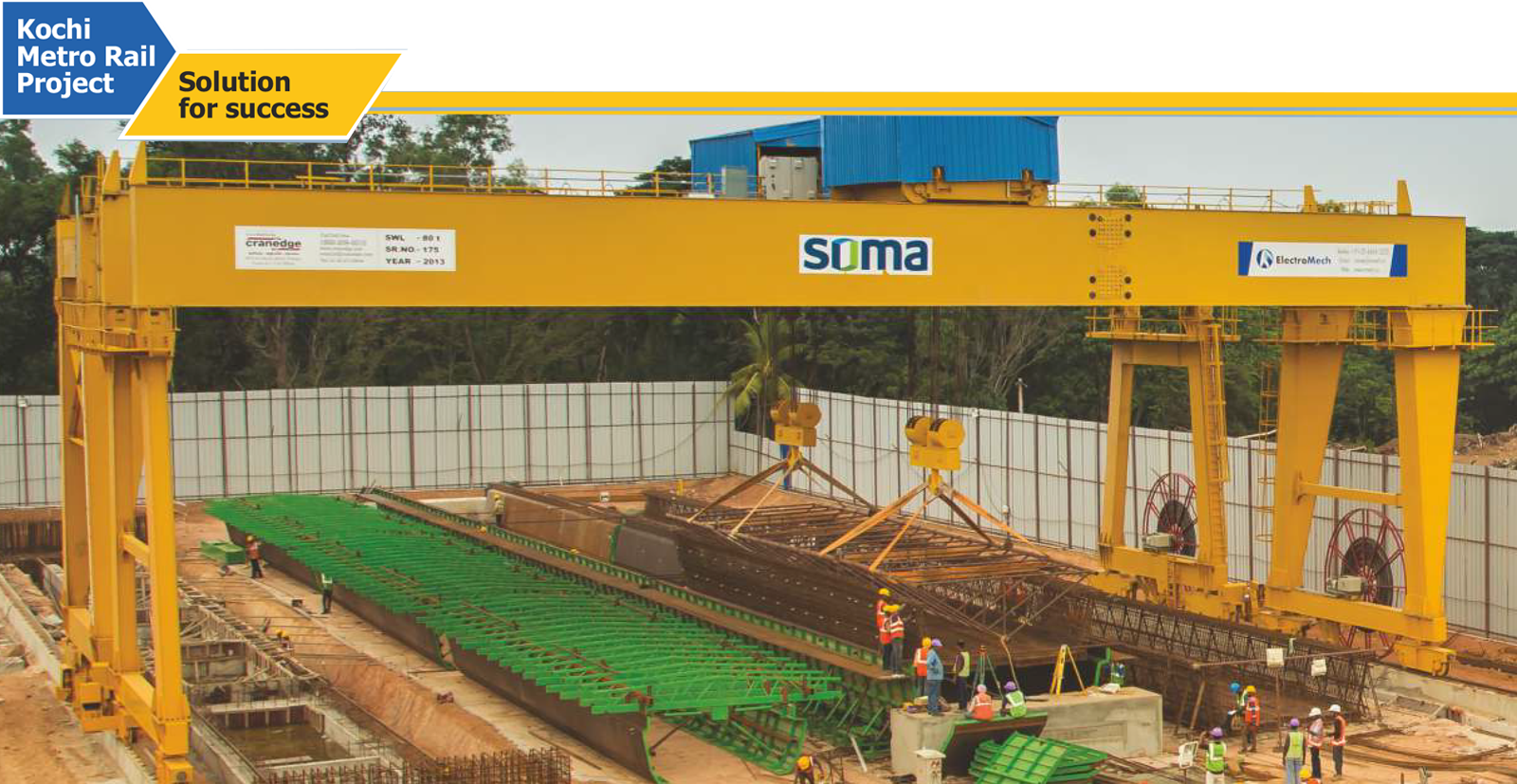 Kochi is a cosmopolitan city with a bustling commercial port in Kerala, India. It is the financial capital of the state, with a population of more than 2 million. The city’s population is rapidly growing and so is its expanse. After cities like Mumbai, Delhi and Bangalore, Kochi is the first tier II city in India to start the execution of a metro rail project to provide an efficient mass transportation system. The Kochi Metro Rail is expected to be the fastest constructed metro rail project in the country. The INR 50 billion (USD 860 million) project consists of 22 stations from Aluva to Petta. The metro rail at Kochi will run on elevated viaduct tracks mounted on prestressed U/I concrete girders with pile/open foundations.

Read about how we helped Soma modify, upgrade and reuse existing ElectroMech cranes that were previously used on several of their other projects. This helped in substantial reduction of project cost and time in procuring new cranes. 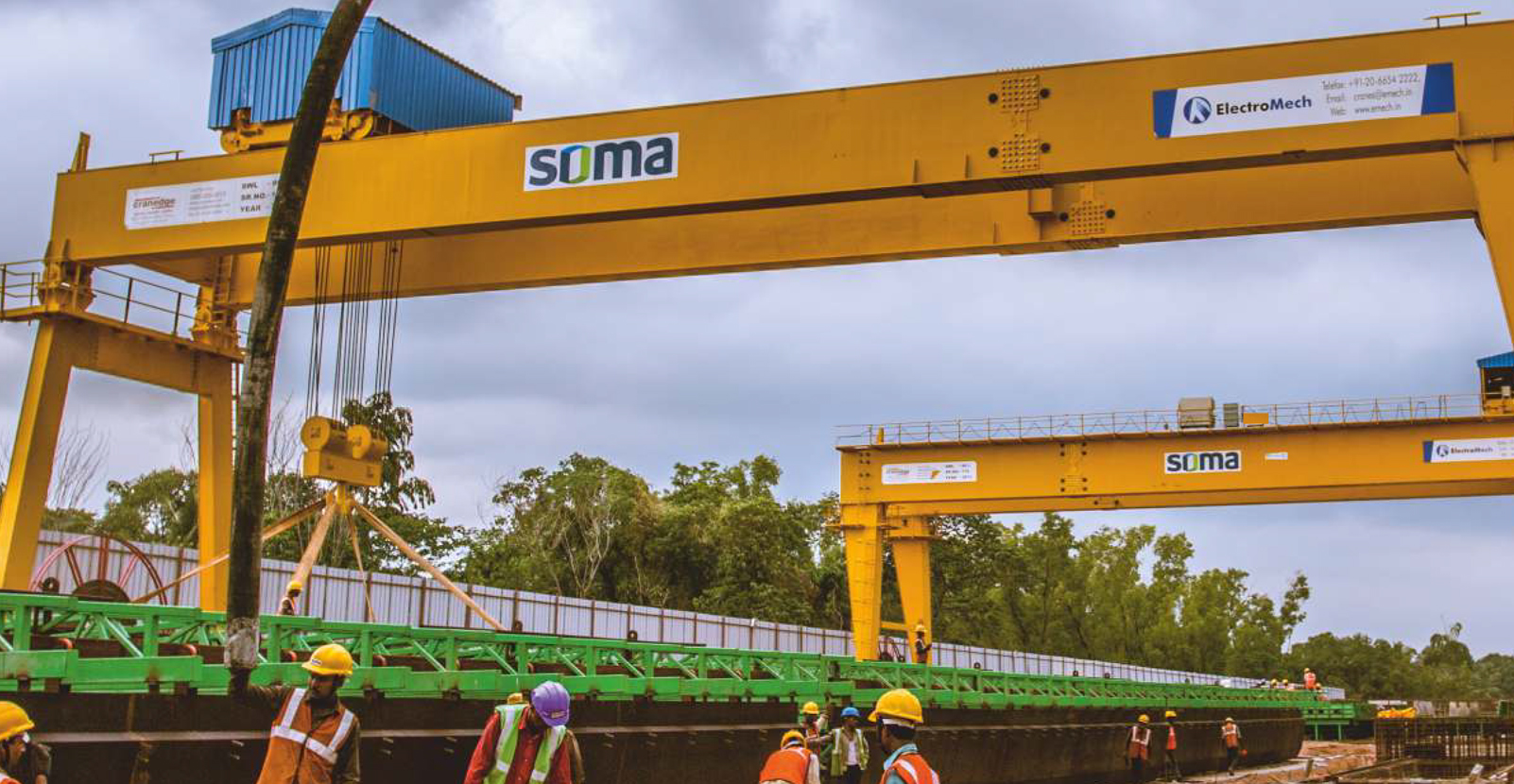 Soma has been awarded the second phase of this metro rail project; which includes the stations from Jawaharlal Nehru Stadium to Ernakulam South. In order to ensure quick and timely completion of the project, Soma set up a casting yard near the project site in Kalamaserry to manufacture pier caps, pier bases, pre-stressed U beams and I beams. The complete yard is divided into 4 regions to carry out the work efficiently and control the entire process. The first area is for machining and processing of bars and rods used for the concreting process. The second and third bays are 300m length each and will provide the concrete segments required for viaducts and metro tracks. The next area is allocated for the storage and handling of these finished products. The material handling requirement for this project included TMT bars, precast moulds and various precast segments at different stages of their production. The project team at Soma was interested in a solution which allowed the reuse of existing ElectroMech cranes that had completed duty at Soma’s other projects. 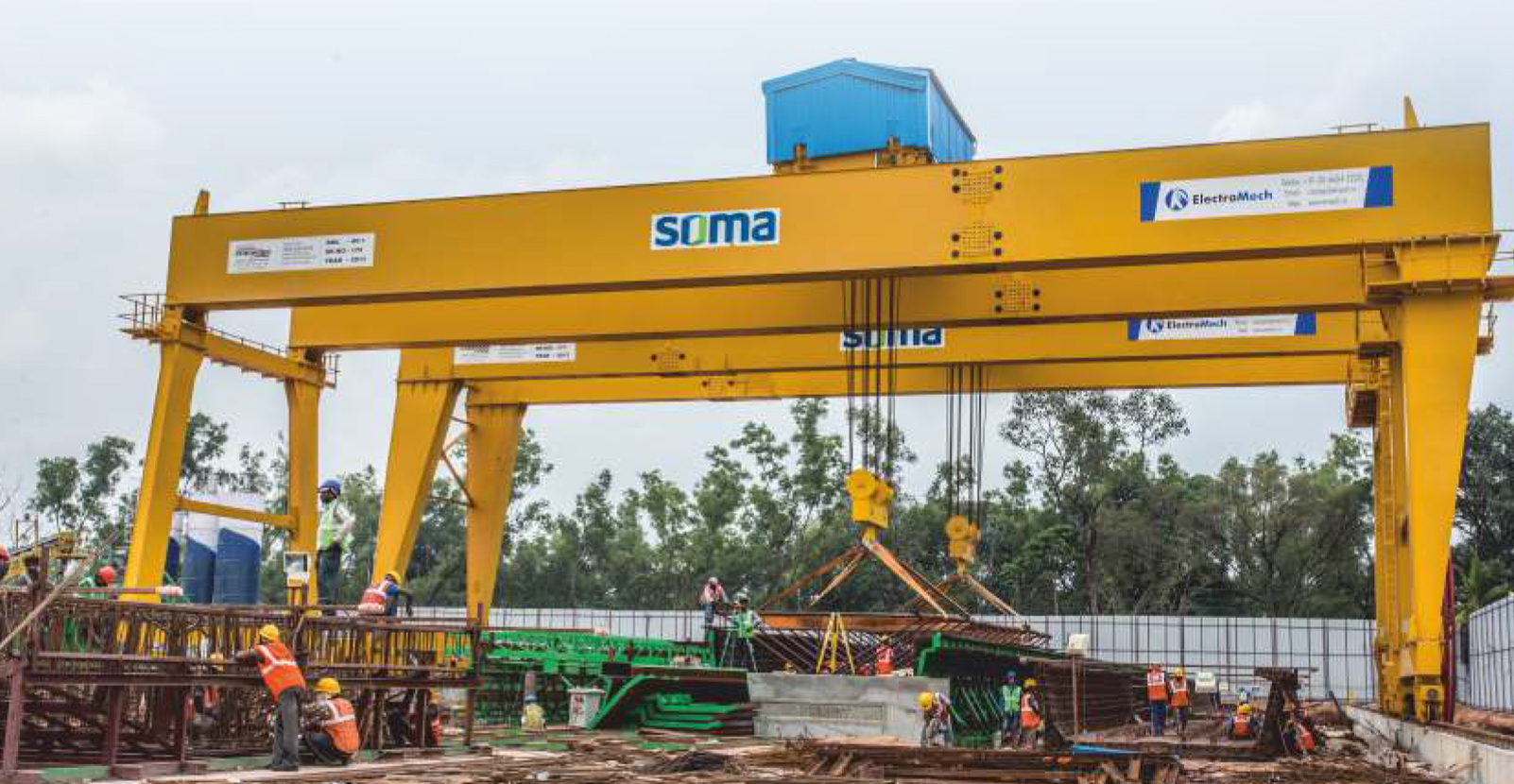 ElectroMech cranes are rugged, reliable and have a long life. Several EPC companies use them confidently over the years on a number of projects - one after the other. Admirably, before relocating them from one project to another, they can be reconfigured and modified to suit the new requirement. This ensures optimal utilisation of assets and also reduces project costs. The cranes being used by Soma for the Kochi Metro Rail Project are a testimony to this.

Team ElectroMech welcomed this tough challenge and designed a solution which was technically feasible and economically viable. It was a proud moment for ElectroMech to see its cranes still standing tall after being used at other project sites. A detailed study of the handling requirements and production volume in this huge casting yard was conducted by the ElectroMech design team, who recommended using 5 gantry cranes. Of these, 4 were to be used for production and one in the dispatch bay for loading precast segments on to the trucks/trailers. Every crane was expected to handle heavy loads, be precise in operations and cover long bays. In addition, two cranes in a bay would often have to work in tandem.

As desired by Soma, for the reuse of the existing cranes, a team from Cranedge, ElectroMech’s service subsidiary, conducted a thorough audit of the existing cranes. In order to meet the new requirements of load, span and synchronisation, Cranedge suggested some modifications and upgrades for the existing ElectroMech cranes owned by Soma. These recommendations were not only to meet the new requirements but also to enhance the life of the cranes. Considering the load to be lifted and the stability required to handle the load, 2 gantry cranes each of 50MT SWL, 28m span and 12m height of lift were required to work in tandem.

The cranes to be modified and used were originally manufactured by ElectroMech in 2008 and supplied to Soma to be used for their Panipat-Jalandhar highway project. They were used for handling precast structures for bridge construction.

These cranes were modified by Cranedge from the original span of 20m to the new span of 28m. They are now being used for handling the entire process from laying of outer and inner moulds, handling the manufactured components and storage of finished products.

The complete modification project was carried out at our works in 2013.

The operations in the second bay are critical, requiring two 80MT gantry cranes. These 2 cranes also work in tandem to cover a bay length of 300m and provide a combined load capacity of 160MT while maintaining stability during the handling of the end product. This is a very specific operation and requires precise dimension control with respect to the manufacturing of girders. Here, first the outer mould has to be placed on the ground. Then, the inner mould has to be placed within the outer mould and then the template has to be placed within these structures. This process is carried out simultaneously in two adjacent rows. The cranes are then used to move finished precast segments to the storage area. These cranes were modified by Cranedge at our works from existing 120MT, 22m span gantry cranes to 80MT, 32m span gantry cranes with 10m height of lift. The modifications included the change of span of the girders and modification of the existing trolley to support a load of 80MT.

These cranes were originally manufactured by ElectroMech in 2009 and supplied to Soma for similar application of handling pre-cast structures for flyover construction in Bangalore.

What does the customer say?

Our casting yard required heavy duty and high capacity cranes for casting of huge structures. Hence we installed ElectroMech cranes to handle our process. These cranes have helped us achieve a faster rate of production with no down time, higher but stable speeds and no maintenance costs. 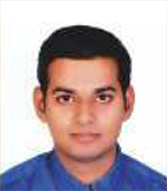 How Soma benefitted from ElectroMech solution