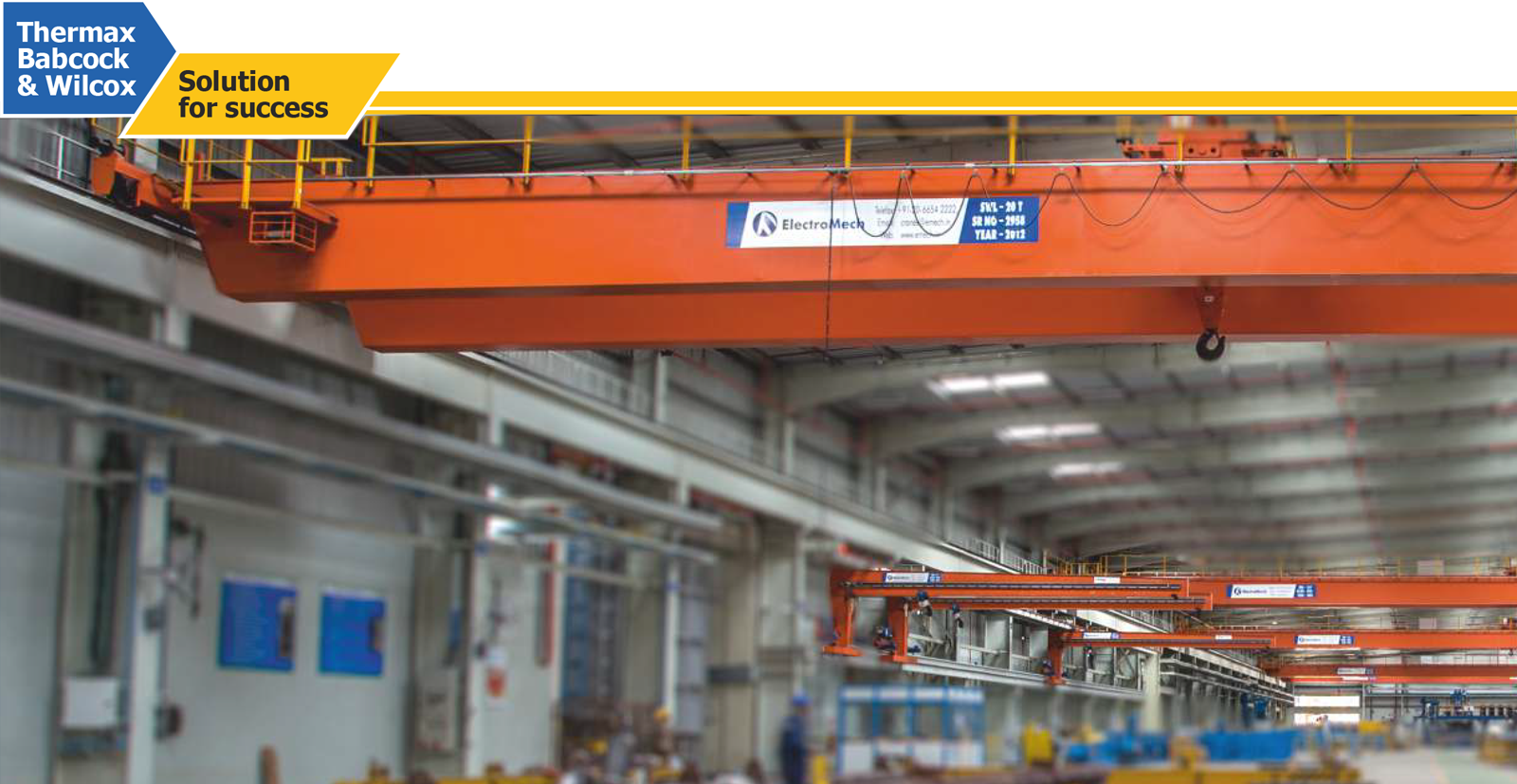 Thermax, headquartered in Pune, is a renowned engineering solutions provider for the energy and environment sector. The Thermax factory in Chinchwad, Pune has several cranes from ElectroMech and are used for various applications such as loading, unloading, handling, and assembly work. ElectroMech has also been providing crane solutions to all of Thermax’s factories as well as for many of their projects.

The company has a joint venture with Babcock & Wilcox (USA), a global leader in the power generation industry, to manufacture supercritical boilers for the power sector. When the company planned to expand their operations and decided to commission a new plant near Pune, requirement for several cranes was also envisaged. This plant, spread over 4,00,000sq.m of land at Shirwal near Pune, is now operational. The manufacturing facilities are split into 3 units; a 25,000sq.m Section shop, a 16,000sq.m Panel shop and a 18,000sq.m Header shop. Satisfied with their past experience with ElectroMech, the TBW Project Engineering team approached ElectroMech at the planning and designing stage of this new plant to help craft the perfect material handling solution.

While planning a new manufacturing plant, substantial costs can be saved by involving ElectroMech at the plant design stage. Thermax Babcock & Wilcox experienced this at their new plant near Pune.

The handling challenges at TBW

While designing and constructing a new factory, consideration of overhead cranes in the plant is crucial for determining the overall specifications of the building. This is because overhead cranes run on gantry girders that are supported by the building structure. In addition to the building structure and roof itself, the entire load of the crane as well as the job being handled is borne by the factory columns. Involving ElectroMech at the factory planning stage is always beneficial since we can optimise the crane design to suit the exact requirement and plant layout. The structural engineer can then optimise the factory building based on the wheel loads and crane dimensions provided by us.

Keeping this aspect in mind, Thermax Babcock & Wilcox (TBW) involved us right from the conceptualisation and planning stage of the project. We were expected to understand the process flow and recommend a suitable system for handling at each workstation as well as integrate all the material handling in the plant. Besides, TBW was also obviously expecting a technically proven material handling system that matched their applications and is cost-efficient.

The ElectroMech team worked closely with the TBW project team to understand the proposed plant layout, expected material flow, planned production volume and thoroughly evaluated handling requirements existing at each of the workstations. Through this rigorous study, several options were developed which were shared with TBW and the factory architects. Each one was evaluated for its competence to match the handling requirement, maximise production efficiency and at the same time optimise investment in cranes as well as the factory structure. Finally, an optimum solution was decided which comprised 45 cranes of different types. ElectroMech, by following a consultative approach, designed a solution that was economical, had advanced features and matched the application requirements perfectly. These cranes with capacities ranging from 10MT to 50MT integrate the entire handling operations on three shop-floors and also cover handling right from raw material storage to the final despatch area, including several fabrication and assembly stations.

What does the customer said while executing the project?

ElectroMech was able to fine tune our plant layout to ensure maximum space utilisation and save on our asset costs.

TBW achieved savings at every step

An apt example of the benefit of involving us during the planning stage can be seen in the plant’s Section shop. The highest capacity crane is 50MT, which would logically require the entire factory building to be designed for the loads exerted by this crane. However, during detailed analysis of the client’s workflow, it was apparent that the 50MT job would never traverse the entire length of the shop-floor. This allowed the structure to be optimised, so that only the necessary portion had to be built to take the load from the 50MT crane. Safety limit switches ensure that the 50MT crane does not travel with its full load to other parts of the shop. This solution gave TBW substantial saving in their structural cost for this shop. Being involved in the design stage also allowed us to provide inputs on the workflow, so as to optimise the choice of cranes to keep costs low while achieving maximum resource utilisation.

For the outdoor duty gantry cranes, TBW opted for a power supply system that was more reliable and had zero maintenance compared to what was used traditionally. Typically, for a gantry crane, one uses cable reeling drums. The cable reeling drum mechanism itself can prove to be problematic in some cases as it increases maintenance. We were able to factor in, at the time of construction itself, a way to use regular shrouded bus bars for supplying power to the outdoor gantry cranes. By this, we have eliminated a lot of hassles which might have arisen in the future had we resorted to the cable reeling drum concept. This approach has also led to further reductions in the project cost.

Energy consumption is also reduced, as the cranes have efficient motors which ensured optimum energy utilisation. If one were to combine the total power consumption of all the cranes used throughout the TBW factory, it would be observed that there is an energy reduction of at least 15 to 20 percent over conventional cranes.

ElectroMech has also supplied TBW with unique solutions like wall travelling cranes. On a shop-floor, with respect to the principles of Lean Manufacturing, waiting time is one of the prime sources of waste. Wall travelling cranes allow workers to service workstations individually without using cranes on the top. Waiting time for the crane is thus eliminated and productivity of the individual workstation is enhanced.

This is a much better solution than a semi-gantry crane, in which one end carriage runs on the gantry girder, while on the other side a leg runs on the floor. Having an end carriage running on the factory floor, creates a safety hazard due to the possibilities of collisions with men, machines and material. Rail tracks or supports would also be needed on the ground, increasing the civil cost. Wall travelling cranes have no legs and travel in the air independently on their own supporting structure integrated with the factory building, thus enabling efficient and safe layout of the workstation. Integrating the wall travelling cranes into the layout was not only a value addition to the project, but also saves the client substantial process time due to higher crane availability.

Though material handling forms a critical part of any workshop, Lean Manufacturing philosophy dictates its reduction. By taking cognisance of what needs to be done on a shop-floor, arranging processes accordingly and by optimising speeds and geometries of cranes, material handling time can be drastically reduced. This needs to be planned in the early stages of the project to derive maximum advantage. The TBW management was extremely happy with their selection of ElectroMech as a solutions partner and for involving us right from the beginning. They could successfully achieve all their objectives and build a manufacturing facility which adheres to the Lean Manufacturing principles.

How TBW benefited from ElectroMech solution