Installing 29 cranes at Air Liquide's UAE plant in record time is a classic example of our ability to think differently and offer ingenious solutions. Read more about how our unique ideas helped integrate critical handling requirements of 300MT loads while optimising project costs.

In 2012, Air Liquide embarked upon a project to set up a plant in Ras Al Khaimah, UAE. To meet their plant handling requirements, they chose to involve ElectroMech at the plant design stage itself. The result was an optimised solution that integrated operations at their plant effectively while offering huge savings on the capital cost. Cranes in a two-tier arrangement, two gantry cranes perpendicular to each other, with crossing traverse paths and cranes working in tandem to lift a 300MT load are some unique ideas implemented at this plant. Optimised crane designs allowed a lighter factory structure and helped Air Liquide save a substantial cost. 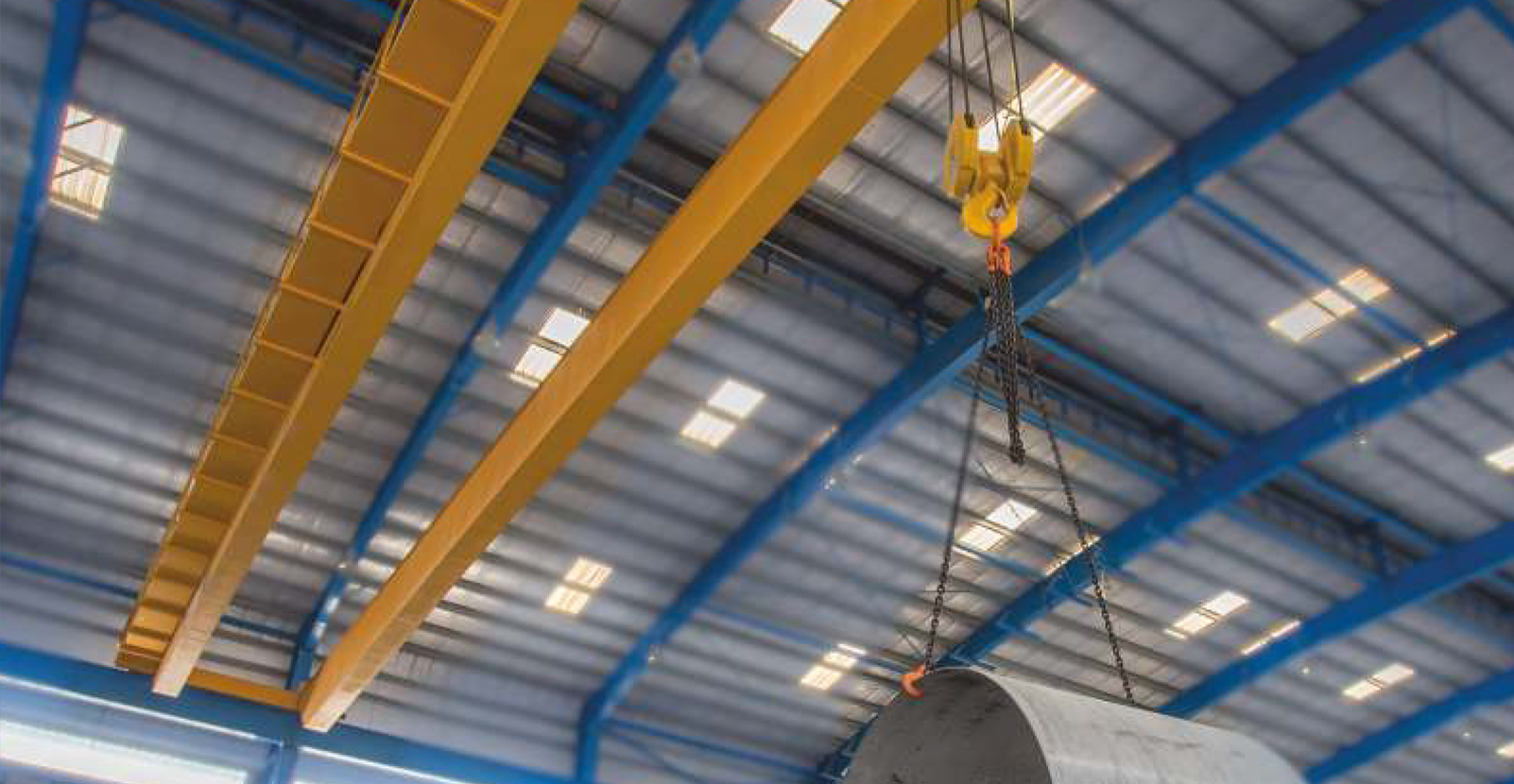 The Air Liquide facility at Ras Al Khaimah is spread over 36 acres and has 6 different shops.

At the raw material yard, large and heavy steel plates have to be unloaded, stored and then shifted to the main plant. During this handling, the plates need to be rotated through 90 o and shifted to the main plant. These plates further pass through processes such as cutting, bending, rolling, welding, fabrication and testing in different shops to form the end product. The main challenge in this area was that the two cranes needed to operate perpendicular to each other and have intersecting traverse paths.

In the fabrication bay, large fabricated pressure vessel parts need to be lifted and remain suspended for a long time for certain operations. At the same time, handling of other material in this bay continues. Here, uninterrupted handling in various bays and safety of people and material is of prime importance.

The gas plant machinery arrives at the despatch bay in two parts, each weighing 300MT, where it is assembled and despatched as a complete unit, weighing 600MT. Our solution needed to be able to handle this gigantic and heavy load with care and precision. After a detailed analysis of the handling requirements from the raw material yard, through various manufacturing processes and finally to the dispatch bay, an optimum solution was devised. Twenty-nine ElectroMech cranes with varying capacities, handle critical parts and components, integrating the in-shop handling.

Two Gantry cranes cover the handling requirements in the raw material yard. One is used to unload and store the heavy steel plates in the stock yard, the other transfers the plates to the main plant. These two cranes are perpendicular to each other and have intersecting travel paths. To enable the intersecting traverse paths for the cranes, a mechanism to change the rail arrangement manually was initially planned. However, this would require frequent manual intervention and be cumbersome in the long run. For a more efficient solution, a mechanism was engineered to eliminate the manual process of changing the tracks and allow the operator to simultaneously use both the cranes. Taking into consideration the dimensions of the wheel collar and edges, and the layout and tolerance of the rails at the point of intersection, a special track was laid. The intersecting rails were arranged with a gap that allowed for the wheel collar to pass through it, while maintaining a strict tolerance for safety. A double flanged wheel was provided at one end of the crane and a wheel without flange at the other end.

Anti-collision devices were added to both the cranes to ensure safe operations during material movement. This design not only completely eliminated the manual process of shifting the rails, but also ensured smooth operation of the cranes in a traverse path.

In the main manufacturing bays, fourteen Single Girder cranes with 10MT capacity and eleven Double Girder cranes with 20MT capacity keep the production process moving smoothly. In the fabrication bay, the cranes are installed in a two-tier arrangement, with the 150MT cranes in the lower tier and the 20MT cranes in the upper tier. This is particularly required because at a few work stations, the heavy fabricated parts remain suspended for a long time. The two tiered arrangement of cranes in this bay substantially reduces wait time, as the 300MT components are kept suspended using two 150MT cranes in tandem allowing the 20MT cranes to pass overhead and the manufacturing process to continue unhindered.

Handling the 300MT component using two 150MT cranes in tandem is a highly critical operation that demands precision. Two such 300MT parts are then assembled together forming the finished component of 600MT. To ensure smooth handling and safety, both cranes are provided with an antisway device.

Responding to the urgency of the customer, the ElectroMech FZE team completed the entire erection and commissioning of all 29 cranes in record time by working for almost 16 hours a day in temperatures as high as 450C. The customer team expressed its satisfaction while appreciating our efforts to complete the job ahead of schedule.

An anti-sway system works on the principle of a pendulum, where the load being handled by a crane acts like a pendulum. As the crane begins to move, inertial forces would make the load sway. The extent of this swaying depends on the length of the pendulum, or in the case of a crane, the length of the wire rope. Without corrective action, only friction will limit the extent of this and deaden this swaying. With no specific device to do this, controlling this swaying depends solely on the skill of the crane operator who manually applies a counter reaction to the movements of the load. Relying solely on the skill of an operator could lead to a hazardous work environment.

The anti-sway system offers several advantages. It controls the rate of acceleration of the crane to limit the extent of swaying of the load. This protects both the load as well as man & machinery on the shop floor from any untoward incidents. Reducing the reliance on the operator to control the load helps reduce the operator fatigue, hence improving efficiency and reducing cycle times. Finally, because the anti-sway system negates the need for the operator to repeatedly start and stop motion of the crane, savings in energy costs are also achieved.